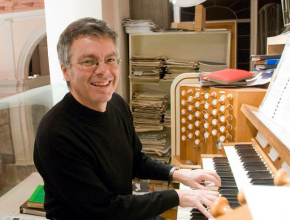 Douglas Mews was born in Cheam, Surrey in 1956. He began playing the organ at St Patrick’s Cathedral in Auckland, where his father (and first organ teacher) was choir conductor. He studied organ and harpsichord with the late Anthony Jennings at Auckland University, followed by harpsichord studies with Bob van Asperen at the Royal Conservatory in the Hague.